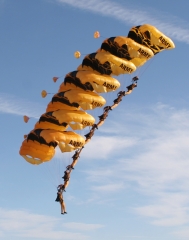 The Strategic Army Command Parachute Team, or STRAC, was formed in 1959 by “Airborne” Soldiers from various military units. Brigadier General Joseph Stilwell Jr. was
responsible for gathering these Soldiers with the original intent to compete during the Cold War effort. This new U.S. All-Army team swept the international competition circuit, in what was then the Soviet dominated sport of skydiving. Later that year on November 1st, this newly formed team performed their first demonstration in Danville Virginia.
In 1961, the Department of Defense announced on June 15th, that the STRAC team would become the United States Army Parachute Team. The team is one of three authorized DoD aerial demonstration teams, along with the Thunderbirds and Blue Angels.

On October 15, 1962 the team earned the nickname the “Golden Knights.” Golden, signifying the Team’s stellar reputation of bringing home gold medals; Knights, alluding to the fact that the Team had “conquered the skies,” and portraying that members of the Team are champions of a set of ideals and principals.