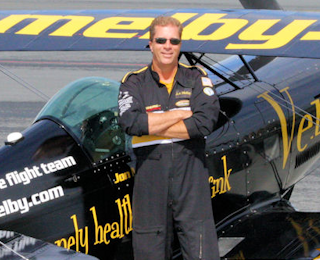 Performing at the Arctic Thunder 2010 airshow was the hi-light of my airshow season. The adventure of flying my plane to Alaska was a portion of the fun, but the airshow itself was spectacular! Since I am an Air Force veteran, I take special pride at performing at Elmendorf AFB. During my military career, I had the opportunity to fly into Elmendorf several times. So for me, it was like going home.

I want to particularly thank you, the Alaska Air Show Association, the Air Force, and all of the sponsors. Without the close working relationship between all involved, Arctic Thunder would not be nearly the success that it is. I also want to mention that one of my roles as an Airshow pilot is to be an ambassador for aviation. My performance in the air is just a portion of my job, the rest I do while on the ground. As I visit the VIP area and the crowd, I enjoy the opportunity to share with them that they too can pursue their dreams, just like I have. I have many instances where I receive e-mails or regular mail from children who have chosen to pursue their dream (no matter what that is) because I provided encouragement. So the airshow is not just a community festival event, it is a platform for so much more.

Again, thank you for your invitation to have me fly for you. I hope that you will consider me as one of your performers in the future.