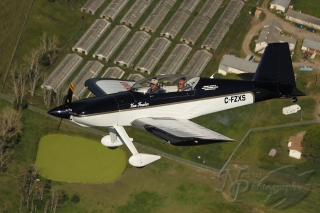 A two ship combination with Eric Hansen in the F1 Rocket, and Ken Fowler in the Harmon Rocket II. Precision, speed, and high performance aerobatics at it’s best….a spectacular show that will bring the crowd to their feet.

Ken and Eric have been performing together in formation for 5 years. As a team they are dynamic and fast. They are the only team of this aircraft type, in the Air Show industry.

Team Rocket has also performed combined routines with Jerzy Strzyz, and Dan Buchanan. If you are planning on booking Team Rocket for your show, don’t forget to ask about combination acts. It is a great way to integrate performances, and provide tons of excitement for your patrons. We’ve been told you can feel the crowd surge.

Ken Fowler
Ken grew up in British Columbia and started his aviation career by first earning his glider license in 1977. In 1978 he joined the Canadian Military as an airframe technician and worked on T-33’s, CF-101 Voodoos, and CF-18’s before becoming a flight engineer in 1988.

Ken has built 5(five) of his own aircraft, and is now building one of his own designs. To date he has over 5000 hours of flying experience as a commercial pilot and flight engineer. Ken retired from the military on May 15/98 with 20 years of service, and is now the Airport Manager at Rocky Mountain House, Alberta. During his last five years with the military he toured the air show circuit with the Skyhawk Parachute Team as one of the crew members of the Buffalo aircraft. Ken has flown air shows from coast to coast, and can be seen throughout the U.S. and Canada.

Eric Hansen
Rumor has it..Ken has a partner. Many claim to have see him perform with Ken from time to time. However we have not been able to confirm any information on him, and even pictures remain elusive. There is talk of him losing his soul to a photo op, so it is understandable he would be a little gun shy.

As far as we know there is a small bio on him. We will try to fill in the gaps where necessary. If you or anyone you know can help us in providing detailed or current information on Eric’s wherabouts, life, occupation, or existence please don’t hesitate to contact our web designer. This is what we know so far…..He’s a Dentist!

Harmon Rocket II
Ken flys a Harmon Rocket II, which he built and maintains. This aircraft is a highly modified RV-4. Power is from a Lycoming IO-540, custom built by Progressive Air of Kamloops, British Columbia and produces 300 H.P. at 2800 RPM. The aircraft’s empty weight is only 1146 lbs, which gives it excellent high-speed aerobatic performance and awesome vertical performance. Although not an unlimited aerobatic aircraft such as the Extra 300 or Pitts, this Harmon Rocket will outperform all such aircraft going vertical.

F1 Rocket
Eric flys the F1 Rocket which is a sleeker, modified version of the Harmon Rocket II