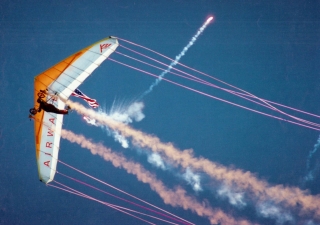 Dan was a New England home builder and flat-track motorcycle racer, and enjoyed the thrill of flying off mountain tops, when in 1981, he paralyzed his legs trying to land in stormy weather. Losing his ability to walk, he returned to college to pursue a career in mechanical engineering and worked in Silicon Valley, CA.

Despite his handicap, Dan returned to flying within six months, and since then his tenacity and adventurous spirit has allowed him to accrue more than 2,800 hours of flight time in hang gliders and sailplanes. His recreational flights are typically 3-6 hours long thermal soaring as high as 18,000 feet over the western mountains.

After his first air show performance at Medford, OR in 1989, his appearances increased each year, and now he shares his thrill of flight with millions of people around the world during his annual 25+ city Airshow tour.
Performing principally across North America, his international venues have included Australia (8 times), Japan, Thailand, El Salvador, The United Arab Emirates, Canada, and Mexico.

Dan is also a Federally and State licensed pyrotechnician trained by Hollywood experts. He installs, wires and sequences all of the special effects on the fabric wing himself. Can you blame him?

He is also a FAA Commercial Glider pilot, enjoying sailplane aerobatics and giving glider rides to friends at Minden, Nevada when not on the Airshow tour. Dan took instruction from Sky Sailing near San Diego, CA from airshow performer Brett Willat, whose school has one of the few “rudder hand control” equipped sailplanes in the US.

Some of his other adventurous pursuits still include flat-water kayaking, SCUBA diving on wrecks and caves, and long distance ATV cross-desert riding and racing.

When asked why he flies, Dan’s usual smiling response is,
“I have to fly… I can’t walk!”